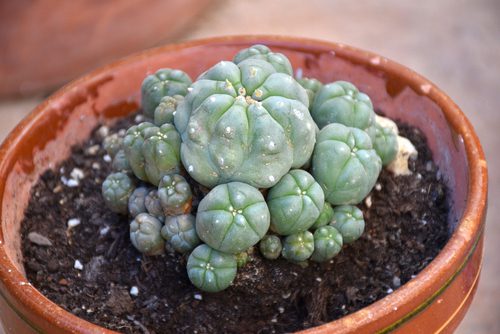 Peyote, or Lophophora williamsii, is a small, disc-shaped cactus native to the southwestern United States and northern Mexico. It has been around for thousands of years and has been primarily used for religious and medicinal purposes by the Aztecs and Native Americans.

Aside from a few exceptions, peyote is illegal to grow and use in the United States. Peyote is a well-known hallucinogen due to the psychoactive substance mescaline being naturally produced by the plant. Users mainly seek the drug for its euphoric effect and its ability to put users in a dream-like trance. However, habitual consumption of peyote can lead to substance use disorder and other mental health issues that can drastically decrease the user’s quality of life.

Hence, it is essential to remember that while peyote has pleasurable effects, abuse of it has its own risks and serious consequences. Individuals diagnosed with peyote use disorder may require treatment and rehabilitation.

A Brief History of Peyote

For thousands of years, Native Americans have used peyote for ceremonial and ritualistic purposes. They also believed that the peyote had healing effects, and this belief continues up to this day among many users of the plant. However, there is not enough research to back these claims.

In 1967, the United States federal government outlawed peyote and classified it as a Schedule 1 drug. This means that peyote is considered a high-risk drug with no legitimate medicinal purposes. Nevertheless, because of its cultural significance to the Native American community, the American Indian Religious Freedom Act Amendments of 1994 exempted Native Americans from the scheduling. As long as peyote is used in their religious or ritualistic practices, it is not considered illegal. That being said, any recreational use of peyote is not allowed under the law. Even the Native American Church does not permit its recreational use, and it also does not allow members who are minors to use it.

Despite peyote being illegal, there are still individuals who secretly consume and distribute it. In 2015, the National Institute of Drug Abuse (NIDA) reported that around 5.5. Million Americans, aged 12 or older, have ingested peyote in their lifetime.

Currently, about 1% to 2% of drug users in the United States use peyote. However, since peyote is not always included in research quantifying drug use, it is difficult to determine the full extent of peyote usage in the country.

How Does Peyote Work in the Human Body?

As mentioned earlier, peyote is a hallucinogen that contains a potent compound called mescaline. It is this particular substance that gives peyote the ability to change a person’s mood and perception.

Mescaline targets the 5-HT2A receptors in the brain. These are the receptors responsible for managing the neurotransmitter serotonin, which plays a part in how people feel, their sensory perception, their sleep, and their body temperature, among others.

The severity of the effects highly depends on the amount and the potency of the peyote ingested. The user’s mood, surroundings, and mental health history may also influence the overall experience, which is also known as a “trip.”

Peyote is a fast-acting drug. Users can start feeling the effects within 30 minutes and peak two hours later. These effects can last up to 12 hours and subside as the body breaks down the mescaline.

While the drug’s effects may decline, traces of peyote can be found up to weeks later. The length of its breakdown depends on the user’s body mass, age, metabolism, hydration level, and other health conditions. Here is a list of the average time peyote can be detected in select parts of the body:

Bear in mind that drug tests do not usually actively search for peyote, so it would have to be specifically requested.

How Is Peyote Taken or Administered?

Before peyote can be consumed, it first needs to be dried and then harvested from the roots of the plant. After harvest, there are several ways to use peyote.

Peyote can be chewed directly or brewed in water to make tea. Some people also turn it into powder. In powder form, peyote can be added to many different things. It can be placed in capsules or smoked by rolling it in a marijuana or tobacco leaf.

What Are the Immediate and Long-Term Effects of Peyote Abuse?

One key characteristic that makes peyote stand out from other substances is that it is not physically addictive. Unlike heroin, for example, your body does not come to rely on the drug for it to function. That said, it is possible for you to become mentally dependent on the drug.

The reason for this is the trips. These hallucinatory journeys can feel like enjoyable experiences where you can relax and have a short escape from reality. The euphoria associated with peyote is one of the main reasons users use this drug in the first place.

Consequently, while there are good trips, there are also bad trips. To elaborate further, here is a quick rundown of peyote’s immediate and long-term effects.

These effects can be divided into two categories: physical and mental effects.

Whether the user is on a good or bad trip, the user might exhibit the following symptoms:

As for mental effects, these can include:

During a good trip, users will feel euphoria and a sense of relaxation—a “high”—alongside vivid hallucinations. It is reported that users can “see sound” and “taste colors,” a phenomenon known as synesthesia.

On the other hand, a bad trip leaves individuals with anxiety, paranoia, fear, and panic apart from terrifying hallucinations. It can make the user act in unexpected ways, which is not only potentially dangerous for the user but also for others within proximity. Moreover, it can cause psychological harm that can lead to lasting effects.

While there is still much to learn about peyote, users who habitually ingest this substance are vulnerable to two long-lasting effects with potentially dire consequences:

Symptoms of Peyote Use Disorder

People who use peyote recreationally may believe that since peyote is natural, it is safe. However, that is not necessarily true.

Over time, as the user continues to consume peyote, they can develop an addiction to it. According to the Diagnostic and Statistical Manual of Mental Disorders, Fifth Edition (DSM-5), the telltale signs of substance use disorder include:

As their condition worsens, users may also start mixing peyote with stimulants, such as cocaine or crack, to heighten the experience. To get better, affected individuals need a lot of support and medical help, in addition to making an effort to make lasting changes in their health and lifestyle.

Rehab and Treatment for Peyote Use Disorder

Accredited rehabilitation centers are equipped with the staff and tools that can help individuals struggling with peyote addiction. Appropriate courses of treatment differ for each person and depend largely on the severity of their condition, as well as their unique situation.

Users struggling with moderate-to-severe addiction can benefit greatly from inpatient treatment. With this treatment plan, they can get 24/7 supervision and support from facility staff. Meanwhile, people with mild-to-moderate addiction may opt for outpatient treatment, during which, they would have multiple treatment sessions throughout the week while staying in their homes.

Currently, there are no FDA-approved medications to treat addiction to hallucinogens, including peyote. Treatments generally focus on addressing its symptoms and counseling the patients on how to effectively cope with their condition. Behavioral treatment may be helpful, but more research is needed to determine its effectiveness.

Finding the right help can be a difficult process. After all, there are hundreds of rehab facilities to choose from across the United States—each with its own approach to helping patients heal from peyote addiction. Some of the things you need to consider when selecting a rehabilitation care facility include the facility’s location, available services, the center’s overall approach to addiction, and staff, among others.

To find the most suitable program for you, partner with Better Addiction Care. We are a third-party information service that can connect you with excellent rehab centers throughout the country. Our primary goal is to help individuals struggling with substance use disorder find the right treatment program for them. Begin the journey to sobriety today by calling our helpline or filling out our contact form.

Can You Drink Rubbing Alcohol – Know the Dangers

While drinking rubbing alcohol would not cross the mind of most rational individuals, anyone suffering from alcoholism might have looked…

The terms used to define drinking-related problems have changed over time, making it confusing for individuals to know what to…

There comes a point in an alcoholic’s life when the struggle and pain of substance abuse is no longer bearable….