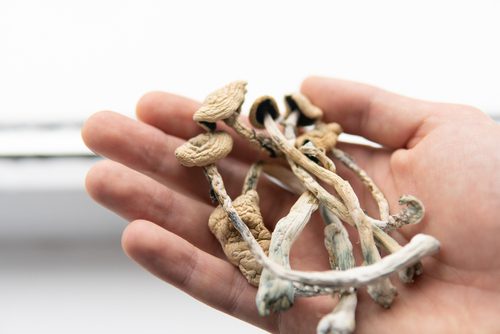 Magic mushrooms are the slang, collective term for mushrooms that contain a psychoactive compound called psilocybin. People who ingest these mushrooms experience an altered sense of reality—seeing, feeling, and hearing sensations that seem real but are not. Currently, over 100 species of mushrooms fall under this category.

These hallucinogenic mushrooms have been used in various cultures in the belief that they can lead their users to a “spiritual state.” Today, however, abuse of shrooms is done for their psychedelic effects akin to other drugs such as ecstasy and lysergic acid diethylamide (LSD.) In 2017, the National Survey on Drug Use and Health (NSDH) reported that around 1.4 million people aged 12 and older were current users of various hallucinogenic drugs, including magic mushrooms.

The United States federal government categorized shrooms as a Schedule-Ilevel substance, meaning that they are high-risk drugs with no legitimate medicinal purposes. Despite this, a few studies have begun to say otherwise. Some researchers believe that magic mushrooms may have a medical benefit for individuals struggling with mental health issues, if administered in the right clinical setting.

A Brief History of Magic Mushrooms

The story of magic mushrooms began centuries before the modern age. Various indigenous groups in America and Europe have been using the shrooms for their psychedelic effects in medicinal and religious ceremonies.

In 1958, Dr. Albert Hoffman, the same man who discovered LSD, managed to isolate the psilocybin in magic mushrooms. More and more people were using shrooms in the past years, and they exploded in popularity during the 1960s. By the 1970s, their recreational use had become illegal.

Despite this, people have continued to use magic mushrooms over the years. Between 2009 and 2015, NSDH suggested that around 8.5 percent of people who had used illicit substances reported using psilocybin at one point in their life.

In recent years, however, research on the potential medicinal benefits of magic mushrooms has begun to mount. In 2018, researchers from John Hopkins University recommended that magic mushrooms should be reclassified to Schedule-IV, as opposed to Schedule-I, would allow the shrooms to be administered for medical use, particularly in mental health. Some studies suggest that psilocybin can be beneficial in therapies, such as enhancing the moods of patients struggling with depression.

In late 2020, Oregon became the first state to legalize the medical use of psilocybin in magic mushrooms. Oregon Measure 109, also known as the Oregon Psilocybin Services Act, will grant legal access to the potent compound as long as the substance is used for medical treatment and is administered in supervised settings. There was a lot of opposition from different parties, including the Oregon Psychiatric Physician Association (OPPA) and the American Psychiatric Association (APA). Their opposition stems from the fact that psilocybin therapy is substantially risky and may have adverse effects on the patients it tries to help.

In light of these new advances, only one thing is clear: the subject of psilocybin use needs more research to fully ascertain any practical uses it may have.

How Do Magic Mushrooms Work in the Human Body?

Magic mushrooms are considered psychedelics, substances that can alter a person’s mood, perception, and thought. Psilocybin is the main component responsible for these effects. Once ingested, psilocybin passes through the digestive tract, where it turns into psilocin.

Psilocin has psychoactive properties that influence the serotonin receptors in the brain. These receptors play a key role in a person’s emotional and mental disposition, cognition, and perception.

The amount of time it takes before the shrooms’ effects take hold depends on how a user takes it. When eaten, they start to show in 20 to 40 minutes. The waiting time is shorter when ingested in tea or soup, with the effects starting within 10 minutes. The trip usually lasts from four to six hours, which is the average amount of time it takes the body to break it down and excrete it.

How are Magic Mushrooms Taken or Administered?

A user can consume magic mushrooms in various forms. They can be eaten fresh, whether through cultivation or wild picking. They can also be dried and mixed with a handful of other foods and drinks to mask their bitter taste. Some of these foods include tea, soups, and even chocolate.

Magic mushrooms can also be dried and converted into white powder. The powder can be added to or formed into a variety of things, including tablets and capsules. It can be dissolved in water or smoked when mixed with tobacco and cannabis.

What are the Immediate and Long-Term Effects of Magic Mushrooms Abuse?

The intensity of these effects highly depends on the potency and amount of drugs ingested, as well as their state at the time they are ingested. For example, dried shrooms contain 10 times more active ingredients compared to fresh mushrooms.

Since shrooms can be found in the wild or cultivated, legally or otherwise, it is difficult to determine the amount of psilocybin in any given species of magic mushroom. Moreover, the psilocybin amount can vary from one mushroom to another, even though they might be of the same species. Hence, the length, intensity, and the kind of “trip” a user will have are almost impossible to predict.

That said, researchers listed down some of the common immediate and long-term effects of consuming magic mushrooms. These are comparably similar to LSD, another hallucinogenic drug. For a more detailed list of these effects, consider the following.

The physical effects users show after ingesting magic mushrooms include:

Aside from physical effects, the shrooms affect the user psychologically as well. These effects may include:

Users often seek magic mushrooms in hopes of having a good trip. On such a trip, the user will feel relaxed and drowsy. A sense of peacefulness and happiness may overcome the user, which is one of its most desirable effects.

However, taking shrooms may also result in a bad trip. When users have one, they experience:

In the worst-case scenario, magic mushrooms have been reported to have caused convulsions. If this happens, the user requires immediate medical attention.

There is still much to discover about the long-term effects that psilocybin has on a user. So far, researchers have noted that affected individuals can experience lasting changes in their personalities. They may also experience flashbacks to their various trips while under the influence of shrooms.

Individuals that chronically abuse magic mushrooms may develop hallucinogen persisting perception disorder (HPPD). Users with this condition experience persistent and distressing perceptive distortions. They have flashbacks to what they had seen, heard, and felt during the trip.

It should also be noted that magic mushrooms look eerily similar to poisonous mushrooms, some of which can cause  spasms, delirium, severe illness, organ damage, or even death. Call for medical help immediately if these symptoms occur.

Signs of Magic Mushroom Use Disorder

Technically, psilocybin is not chemically addictive. Even if a person stops taking it, they may not necessarily have physical withdrawal symptoms. However, users can become psychologically addicted. In this case, the user may experience psychological effects after stopping, such as depression.

Based on the fifth edition of the Diagnostic and Statistical Manual of Mental Disorders (DSM-5), the common signs and symptoms of magic mushroom use disorder include:

Individuals who have a mental health history or are taking psilocybin with other drugs have an increased risk of developing substance use disorder. To effectively heal, the help of trained professionals is needed.

Rehab and Treatment for Magic Mushroom Use Disorder

The most suitable treatment for magic mushroom use disorder depends on the following factors:

To become sober, affected individuals first need to go through a detox program. The detoxification process can be a distressing experience without medical help. In a rehab facility, medical professionals can help guide the patient to detoxify safely and more comfortably .

After the detox, the patient will continue their addiction treatment with counseling and lectures. During these, the patient will learn healthier coping mechanisms, strategies to avoid relapse, and other life skills. Once the program has finished, the recovered individual may consider an aftercare program to remain on track to sobriety.

One of the crucial things to understand about rehab is that it differs for each person. The programs are highly individualized to the needs of the patient. Hence, it is essential to find a program that can efficiently address your needs.

Fortunately, Better Addiction Care has your best interests at heart. With connections to many accredited rehab facilities throughout the country, we can help you  during the entire rehab process—from picking a facility to preparing an aftercare program. Contact us and start the journey to a shrooms-free life today.

Can You Drink Rubbing Alcohol – Know the Dangers

While drinking rubbing alcohol would not cross the mind of most rational individuals, anyone suffering from alcoholism might have looked…

The terms used to define drinking-related problems have changed over time, making it confusing for individuals to know what to…

There comes a point in an alcoholic’s life when the struggle and pain of substance abuse is no longer bearable….