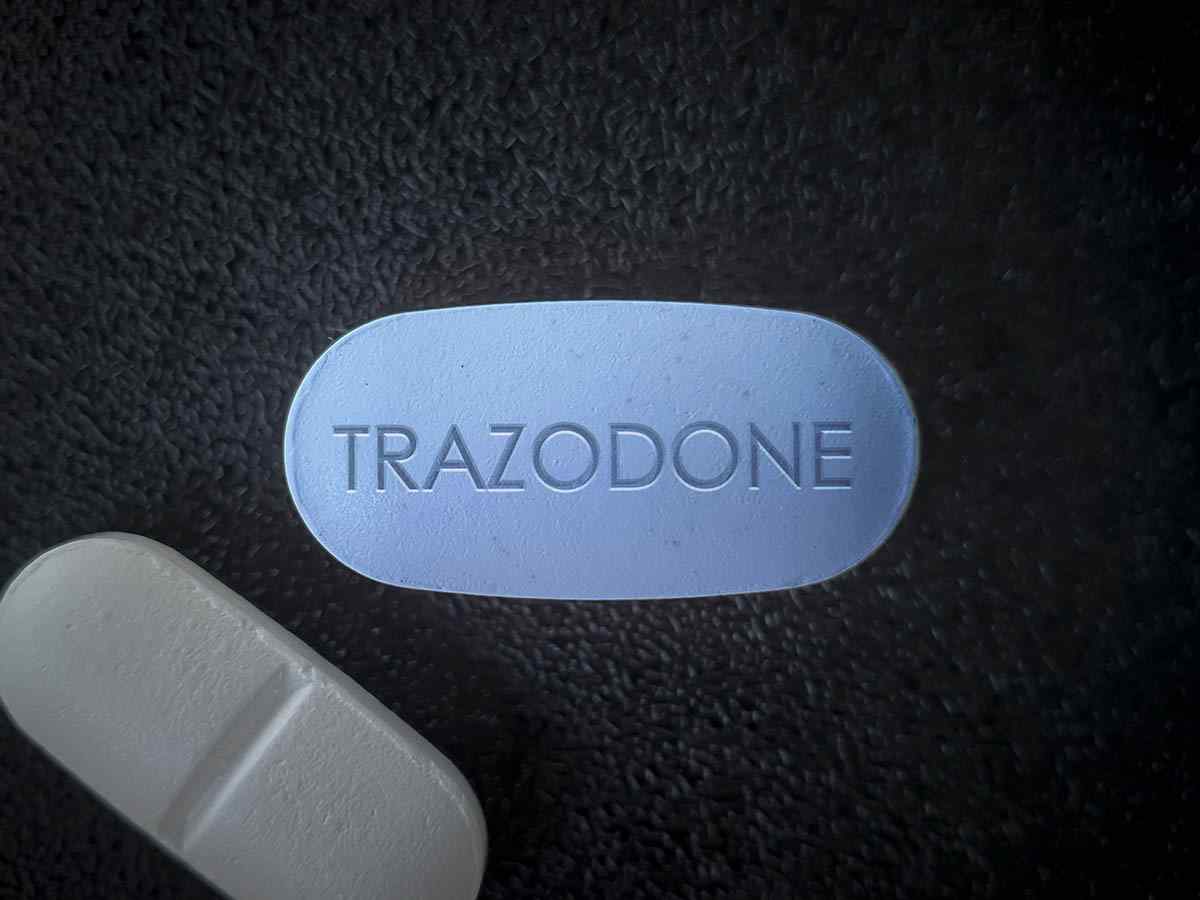 Trazodone is an antidepressant that is FDA-approved for the treatment of major depressive disorder (MDD).1

Trazodone is currently only available on prescription in the United States. Though it is mainly used to manage and treat major depression, primary care and mental health providers also frequently employed it as a sleep aid and as a treatment for schizophrenia and anxiety.2

Trazodone is classified as a SARI drug (serotonin antagonist and reuptake inhibitors), along with other drugs such as etoperidone and mepiprazole. Although its precise mechanism of action is not fully known, it has principally been observed to slow serotonin reuptake, the process by which serotonin (a key hormone responsible for regulating mood and feelings of well-being) is reused by the nerve cells that produce it. These inhibitory properties, in turn, leave more active serotonin available to stimulate other nerves.1, 3

As a treatment for depression, trazodone may be employed as a monotherapy or used in conjunction with other drugs or psychotherapeutic interventions. Though it does also see some common use as a sedative for patients with sleep issues, trazodone is not FDA-approved for this purpose at present due to a lack of credible clinical data supporting its use as a sleep aid. 1

Other psychiatric and medical conditions for which trazodone is sometimes used off-label include but are not limited to the following4:

How Can Trazodone Be Abused or Misused?

Trazodone is not currently listed as a controlled substance by the FDA. Although the particular abuse potential of trazodone has yet to be systematically evaluated by multiple preclinical or clinical studies, existing studies featuring the drug have revealed no indication that it is potentially addictive or habit-forming.5 While the extant literature on the subject suggests that risk of trazodone abuse is generally low, it should be noted that this conclusion has yet to be conclusively verified for subjects with histories of alcohol or drug abuse.6

Due to its sedative properties, trazodone does retain some potential for misuse in rare cases, such as when it is taken recreationally, at doses above recommended levels, or for longer periods of time than originally prescribed.

Individuals prescribing or being prescribed trazodone, as well as those who might attempt to misuse the drug, should be aware that it has been found to exhibit clinically important interactions with the following substances:5

In addition, trazodone has been shown to carry some risk for causing congenital abnormalities and other adverse effects on the fetus in animal test subjects. In light of this, pregnant women are typically advised against taking the drug. Young individuals are also advised against using the drug because of an increased risk for suicidal ideation.

Possible adverse effects a patient may experience when taking trazodone include the following:1, 2

In addition to the above, the following symptoms indicate a serious adverse reaction to trazodone:2

If you observe these symptoms in yourself or another individual who may be abusing or medicating on trazodone, contact your doctor or emergency medical services immediately. Likewise, don’t hesitate to report any other unusual symptoms or problems you might experience when taking the drug.

Taking more than the recommended amount of trazodone, whether by accident or deliberately, can lead to overdose. Important signs and symptoms of trazodone overdose include the following:7

Seek emergency medical attention for any individual experiencing a trazodone overdose immediately. As much as possible, have the following information ready before calling emergency services:

Do not attempt to induce vomiting unless explicitly advised to do so by a healthcare provider or poison control expert. They will give you further instructions on what to do for the patient while waiting for professional help to arrive.

Getting Treatment for Trazodone Abuse

If you’ve been taking trazodone in higher doses, for longer intervals than recommended by your doctor, or with other substances, you may likely be suffering from a substance abuse problem. In light of this, it’s probably high time to reconsider your relationship with the drug. Dedicated medical professionals can help you come up with a comprehensive plan to curb your reliance on trazodone or any other drug and help you take the necessary first steps toward recovery.

If you’re seeking rehabilitation options for individuals with substance abuse issues, whether for yourself or a loved one, you can normally expect to have a choice between the following two treatment setups:

Get in Touch with a Recovery Support Advisor Today

Deciding to get help is the first crucial step a person can take toward overcoming a substance abuse problem. If you’re worried about financing your treatment, you can take comfort in the fact that most insurance providers offer a level of coverage for substance abuse rehabilitation services. And even if you don’t currently have an insurance plan, a professional recovery support advisor can recommend a wealth of other ways to fund your treatment.

Call Better Addiction Care today at 1-800-429-7690 and our advisors will be glad to help you verify your insurance. They can also walk you through the process of choosing a treatment center that’s appropriate for your condition and current financial situation.

A Look into the History of Trazodone

Trazodone was first synthesized in Italy in the 1960’s by researchers under the Angelini Group. At its inception, the drug had been developed in line with the mental pain hypothesis, a theory that proposed a connection between major depression and a decreased pain threshold in affected patients. This theory postulated that the same mechanisms, in essence, were responsible for subjects’ experiences of both mental and physical pain.8, 9

Trazodone was approved by the FDA in 1981 and is distinguished as the first non-tricyclic antidepressant to be registered for use in the United States.10 Today, it is marketed and sold in many countries all over the world, including in the US and in a number of European and Latin American countries.