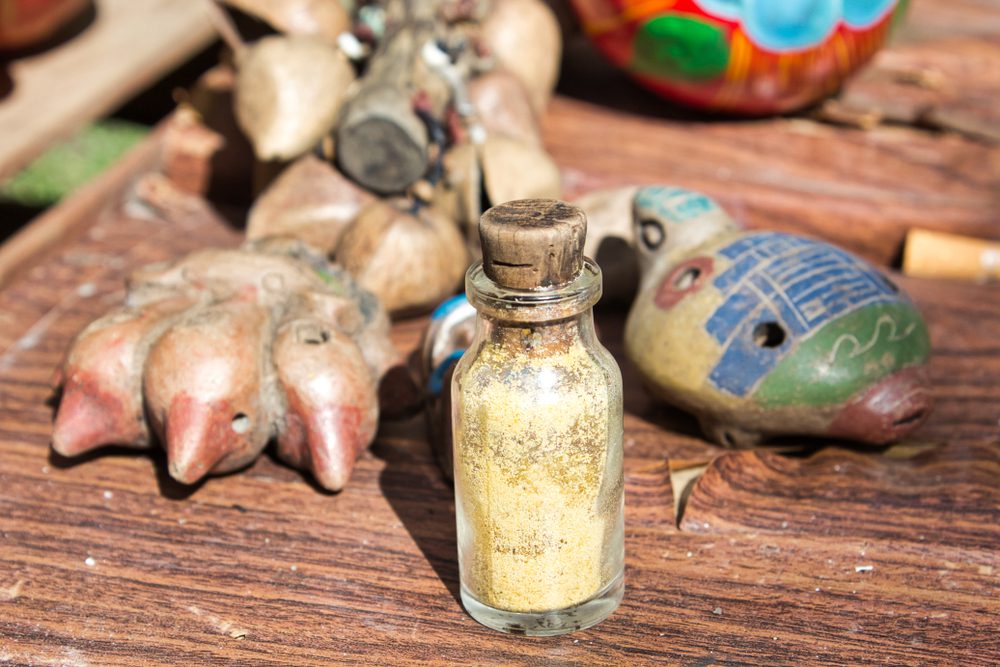 DMT, or N,N-dimethyltryptamine, is an indole alkaloid that naturally occurs in plants. When ingested, DMT is capable of producing brief but intense psychedelic or hallucinogenic effects.1

One of the most well-known plants that naturally contain DMT is Psychotria viridis, which can be found in South America and some parts of Asia. DMT is the main psychoactive ingredient in the ayahuasca brew, which also contains beta-carboline alkaloids from the plant Banisteriopsis caapi, which, in turn, act as monoamine oxidase inhibitors that make DMT more bioavailable. In North America, DMT occurs in several other plant species, including Phalaris arundinacea, Phalaris tuberosa, and Phalaris aquatica or canary grass.2

DMT is classified as a Schedule I substance in the United States under the Controlled Substances Act.3 This means that the drug has no accepted medicinal purposes and has a high potential for abuse.

Why Do People Use DMT and Ayahuasca?

As previously mentioned, dimethyltryptamine currently has no accepted medical use in the United States. However, it can be used by researchers upon registration and corresponding approval from both the Drug Enforcement Agency and the Food and Drug Administration.4

Outside of medical research, DMT has been used since ancient times in various religious practices and rituals, particularly in South America.4,5 The most notable example of this is ayahuasca, a pan-Amazonian psychoactive brew made from Psychotria viridis, Banisteriopsis caapi, and a mix of other ingredients. It’s consumed socially as a type of tea, as well as a spiritual medicine during shamanic ceremonies.6 Over time, the use of ayahuasca spread to other areas, particularly in places where non-indigenous peoples have also started using them. This brought up issues centered around religious freedoms and drug control laws.7

How Is DMT Abused?

When used by itself, DMT or dimethyltryptamine is either snorted, smoked, or injected. This is because taking the drug orally can decrease its effects or bioavailability, unless it’s taken with a substance that can slow down its metabolism long enough for it to produce its psychoactive effect.4 This psychoactive effect—which can alter a person’s mood, feelings, and thoughts—is the primary reason why DMT is used and abused recreationally.

It must be noted that while DMT use in the United States is not common, its prevalence is continuously increasing, especially among the young adult population. Recreational drug users who prefer psychedelics are also more likely to use tryptamines like DMT.8

DMT and Ayahuasca’s Side Effects

The side effects of DMT or dimethyltryptamine are primarily psychological and hallucinogenic in nature. These include seeing rapidly moving, brightly colored images, loss of control, and a dissociated state of mind where euphoria and anxiety either alternated or existed together.9

Additionally, the following short term effects have been observed in people who consume ayahuasca:10

The long-term effects of DMT use and abuse are currently not known, although hallucinogenic drugs have been found to cause persistent psychosis and hallucinogen persisting perception disorder or HPPD.10

Persistent psychosis manifests as prolonged mental problems, which include disorganized thinking, paranoia, mood changes and visual disturbances. Meanwhile, HPPD manifests as a recurrence or “flashback” of previous drug experiences, including hallucinations.12 However, persistent psychosis and HPPD are rare conditions; further study is needed to fully establish their link with DMT.

While DMT is a Schedule I drug, it’s important to note that its potential for overdose, misuse, and addiction are still under study.

At high doses, dimethyltryptamine has been found to cause cardiac and respiratory arrest that can lead to death.11 As a hallucinogen, DMT can also cause unpleasant side effects at elevated doses, but such reactions are often not life-threatening. Overdoses are also more likely and common with certain dissociative drugs like PCP.12

However, hallucinogens can still cause serious harm because of their capability to drastically alter the perception and mood of a person. Thus, users may do things that can endanger them such as engaging in risk-taking behavior or agreeing to dangerous dares. As with all drugs, there’s also a risk of accidental poisoning if DMT is mixed with other drugs or substances.12

The misuse and addiction potential of DMT or dimethyltryptamine is currently unclear. What’s more, unlike other hallucinogens, DMT does not appear to lead to tolerance. Still, there’s a possibility to develop a dependence on DMT after prolonged use.12

According to the fifth edition of the Diagnostic and Statistical Manual of Mental Disorders (DSM-5), there are several criteria for substance use disorders. Some or all of these may possibly apply to DMT use:13

If you or a loved one seems to have developed a psychological dependence on DMT or are frequently suffering from substance intoxication, the first step in the care continuum is detoxification. Detoxification involves removing the presence of the drug in your system in the safest and most comfortable manner possible. If ever you experience unpleasant symptoms at any point in the process, there will be medical professionals who can provide you with proper care.

Rehabilitation and Treatment of DMT Addiction

As previously mentioned, there’s still more research needed in order to fully understand DMT and its potential for addiction. Nevertheless, if you feel like your use of DMT needs intervention, it’s best to seek professional help. Consult your doctor or a drug rehab facility so you can find the most suitable option for you. In general, two options are typically available to those seeking addiction treatment:

There are currently no FDA-approved medications to specifically treat addiction to hallucinogens.12 More studies are needed to find out if there are any medicines or other forms of therapy that can address this substance abuse or misuse problem.

Find the Right Treatment Center for You

If you or a loved one is struggling with DMT misuse or abuse, call Better Addiction Care today at 1-800-429-7690. You can speak with one of our recovery support advisors who can put you in touch with treatment centers near you so that you can start your journey toward a drug-free life.

Better Addiction Care understands that recovering from substance use disorder is a lot of work, so we aim to make the process significantly easier for struggling individuals. If you have insurance, our support advisors can verify your coverage; if not, then they can help you explore other financing options for your treatment.

A Brief History of DMT and Ayahuasca

DMT is widely known as the main active ingredient in a bitter, brown brew called ayahuasca. The South American brew is made from a variety of plants such as Psychotria viridis and Banisteriopsis caapi. For centuries, people from different cultures have been using the ayahuasca brew for medicinal and religious purposes. They believe that drinking the tea helps them gain “spiritual insight.”

Soon after its discovery in the west, researchers began exploring DMT’s potential use for medicinal treatment and synthesized it in laboratories. The process resulted in a white, crystalline powder that can be smoked or vaped to achieve the same yet shorter effects. This synthesized form of DMT became a popular drug of abuse in the 1960s.14

Despite its reputation for being an illicit substance, some indigenous groups still consider DMT and ayahuasca as a sacred part of their culture and traditions. Out of respect for these communities, the Supreme Court of the United States ruled in 2006 that the federal government cannot prevent these groups of people from using DMT in their religious rituals.15

Nonetheless, DMT remains illegal for most of the American population. Aside from a few highly monitored and specially registered studies, the use of DMT is prohibited within U.S. borders.