In 2018, a study published in the American Journal of Psychiatry estimated that about 5 million Americans were misusing prescription stimulants, contrasted with 16 million prescriptions for people over 18 years old. 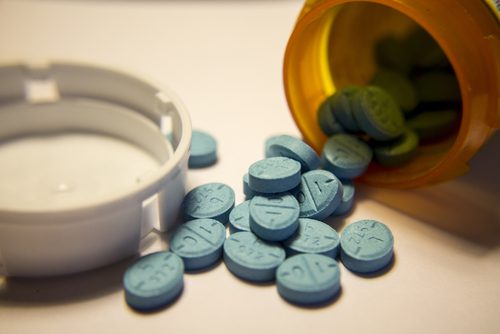 Millions more children also take prescription stimulants, mostly to control ADHD and narcolepsy. The vast majority of these stimulants are amphetamine-class drugs, which are considered to have a high risk of addiction.

There are several amphetamine-class stimulants currently used for these medical applications, including those marketed under the brand names Dexedrine, Methylin, and Ritalin, among others. However, Adderall is a market leader, when accounting for the regular and extended-release versions of this medication. This makes it more likely to be encountered by a potential misuser in the American context of prescription amphetamine misuse.

In this article, we’ll discuss how Adderall is used, its effects on the human body, how to spot potential substance use disorders related to it, as well as the treatment for Adderall use disorders.

A Brief History of Adderall in the United States

Adderall, a brand and now street name for a patented blend of amphetamines, is a relatively recent drug, having been introduced in 1996. It was first marketed by Richwood Pharmaceuticals, which subsequently merged with Shire Pharmaceuticals.

From its release through the early 2000s, it was a drug that was primarily associated with schoolchildren with ADD. In 2001, Adderall XR, an extended-release version, became available and it soon slowly became popular with people who needed to concentrate or stay awake, such as truck drivers, night shift workers, and college students.

Medical students, in particular, became especially noted misusers of Adderall and other prescription stimulants likely due to a combination of academic pressure and easy access. A study published in 2013 found about 1 in 5 medical students surveyed had misused prescription stimulants in their lifetime and about 1 in 6 used them during their time in medical school. Only one in 10 had an ADHD diagnosis, which points to massive rates of misuse. Of the stimulants used, Adderall was by far the most popular.

However, this is not the first time we have seen these patterns of prescription stimulant misuse. The United States experienced a massive amphetamine use epidemic from the late 1920s through to the early 1970s, with up to a tenth of the entire American population at the time being exposed to amphetamine class drugs that are today considered Schedule II (having a high potential for abuse or addiction) according to the DEA.

Adderall is, likewise, classified as a Schedule II drug as well. While rates of misuse are not quite at historical levels, they are on the rise, especially among young adults. Data from emergency room visits have shown that young adults are the most likely to overdose on Adderall, which is different from the public perception of children being the main at-risk group.

Rising Adderall misuse rates are currently not as big of a hot button topic as the opioid crisis or the resurgence of crystal meth use. However, given that Adderall is a relatively new drug, the effects of its long-term misuse are still unknown, which makes its growing off-label popularity as a recreational and performance-enhancing drug a cause for concern.

How Is Adderall Used?

Both the regular and extended-release formulations of Adderall and its generic versions are designed to be ingested in tablet form. People misusing Adderall may take larger-than-recommended doses or take it in other ways, such as by crushing then snorting, smoking, or vaping it. Some users may also dissolve the drug and take it intravenously. These non-recommended uses of Adderall are intended to bring a quicker or more intense high.

Adderall and similar drugs are widely prescribed for treating ADHD and related psychiatric disorders and has been proven to be highly effective at this application. It is also prescribed for narcolepsy and similar sleep disorders. When used off-label or misused, Adderall is often taken for its euphoric and stimulant effects, which are broadly similar to those of other amphetamine-class drugs. Adderall is often misused by adolescents and young adults as a way to concentrate better in academic settings and occasionally as a party drug, especially mixed with alcohol or other drugs.

How Does Adderall Affect the Brain?

Adderall increases the production of a number of key neurotransmitters, specifically serotonin, norepinephrine, and dopamine. Dopamine is especially critical as it is responsible for facilitating communication between nerve cells, including brain cells. A controlled dose of Adderall can be used to suppress ADHD and narcolepsy while a higher dose can bring more pronounced stimulant effects.

Prolonged misuse of Adderall can lead to tolerance and damage to the brain’s dopamine production process. This can lead users to “crash” and have impaired brain function, along with uncomfortable withdrawal symptoms. Notably, the natural production of dopamine might stop, which can lead to slowed thinking, lethargy, and fatigue. This can lead to a person becoming reliant on Adderall to function normally or to avoid discomfort from withdrawal.

What Are the Medical Applications of Adderall?

Adderall and similar drugs are widely prescribed in the United States to control the symptoms of ADHD, ADD, and similar psychiatric issues related to concentration. Adderall can bring noticeable improvements in about 70 to 80 percent of children and 70 percent of adults with ADHD. These effects can improve even more when behavioral therapy is part of the treatment.

Adderall is also a first-line drug for the treatment of narcolepsy, with about 80 to 90 percent of patients experiencing an improvement in their symptoms. For this purpose, the extended-release version is most often used.

What Are the Effects of Adderall Use?

Using Adderall as directed can safely and effectively alleviate the effects of ADHD and narcolepsy. However, as with other amphetamine class drugs, Adderall also has side effects even when used as directed.

Users of Adderall may feel one or more of the following when using the drug as intended:

Adderall may also have these other specific effects:

If you suspect that you are starting to misuse Adderall or if you suspect someone to be misusing it or other drugs, contact a qualified clinician to discuss your next step. Continued misuse of Adderall can lead to an Adderall use disorder, which can require extensive rehabilitation.

What Is Adderall Use Disorder?

Adderall use disorder is the repeated compulsive misuse of Adderall. It is a type of substance use disorder as defined in the latest Diagnostic and Statistical Manual of Mental Disorders (DSM-5) by the American Psychiatric Association. It is now the preferred term for describing conditions previously called “Adderall abuse”, Adderall dependence”, “Adderall addiction”, as well as other related terms. Like any other psychiatric disorder, only a physician can diagnose the existence of an Adderall use disorder in a patient.

Treatment of Adderall Use Disorders

Recovering from an Adderall habit can be extremely difficult to do, especially if you have a severe Adderall use disorder. While Adderall withdrawal carries a much lower risk of physical harm compared to withdrawal from alcohol, opioids, or benzodiazepines, like all amphetamines the compulsion to take more drugs tends to be strong.

Unlike many other drugs, there are also no special medications for Adderall use disorder that could significantly increase the chance of recovery. Patients need to wait until their body has expelled the drug.

In most situations, withdrawal management may be needed for patients with a severe Adderall use disorder. This will involve giving the patient progressively smaller doses of Adderall or a similar amphetamine until the patient can more comfortably get off of the drug. Eventually, the dosing will stop to allow the patient’s body to detoxify and expel all traces of amphetamines and metabolites from their body.

Post-treatment counseling and therapy on an outpatient basis will sometimes be recommended, depending on how severe the case is. This is done to improve long-term outcomes and to address the specific cause of drug-taking behavior. If the patient was previously using Adderall as a prescribed medication, alternative medication or treatments may be recommended as well.

If you believe you have an Adderall use disorder, contact a qualified treatment specialist immediately for complete diagnostics, and to discuss your options.

Amphetamines like Adderall are critical for treating ADHD, narcolepsy, and related conditions. Without these drugs, millions of people would be unable to live normal lives. However, because these drugs are needed by so many, this increases their availability to potential misusers.

High-school and college students, in particular, are extremely vulnerable to developing substance use disorders related to Adderall due to social pressure, wide availability, and a motive to use drugs for both athletics and academics in hyper-competitive learning environments.

If you know someone who is misusing Adderall or similar drugs, contact a qualified clinician to learn about your options for treatment.