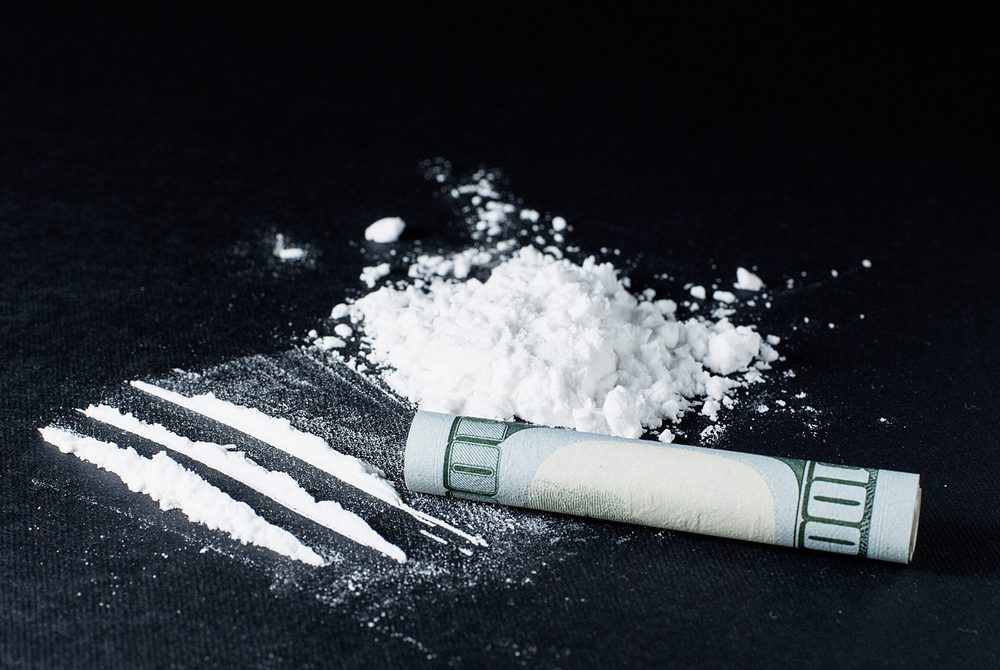 Cocaine is a highly addictive stimulant drug that is derived from the leaves of the coca plant.1

When either injected or inhaled, cocaine can reach the human brain and build up a rapid, intensely euphoric effect within seconds. This is due to the rapid increase of the neurotransmitter dopamine in the brain, which is critical in the regulation of feelings of reward.1

A user will typically experience a “rush” that is characterized by feelings of alertness and excitement, and then a “crash” that manifests through physical exhaustion, mental exhaustion, sleepiness, and a craving for more of the drug. After taking large doses or consuming cocaine for prolonged periods, a person can quickly develop cocaine tolerance.1

Cocaine is classified as a Schedule II drug under the United States Controlled Substances Act. Though it has an accepted medical application, the drug also has a high potential for abuse.1

Cocaine hydrochloride solution has been medically approved for use as a topical anesthetic. In addition, it can serve as a means to reduce bleeding of the mucous membranes in the nasal cavities, mouth, or throat. However, other products that don’t contain cocaine can also serve this purpose, and as such, cocaine is not often used for medical purposes in the United States.1

How Cocaine Is Abused

Most of the cocaine products consumed in the U.S. are manufactured illegally and are used for recreational purposes. Some 90 percent of these products come from Colombia, while other South American countries like Peru and Bolivia are also significant sources. Cocaine products are typically manufactured in remote jungle laboratories, and they are trafficked into the U.S. through the border with Mexico.1

As per the data of the US Drug Enforcement Agency, cocaine abuse often occurs in these ways:1

Due to the illegal nature of most cocaine products, cocaine is commonly sold in the black market. It often comes in the form of a fine white powder. Dealers may “cut” the cocaine or mix it with similar-looking additives like sugar or cornstarch in order to stretch their profits. Cocaine base that is meant to be smoked, also known as crack, comes in the form of solid white rocks.

It is also common for users to mix cocaine with the opioid heroin in order to achieve an even more intense high. The combination is known as a “speedball,” which can be very dangerous because cocaine and heroin have opposing effects on the brain.3

Drugs That Interact with Cocaine

Several types of drugs can induce adverse reactions when taken in combination with cocaine. Some examples are the following:4, 5, 6, 7

Immediate Side Effects of Taking Cocaine

Cocaine use can result in the following acute and short-term side effects:1, 8, 9

Chronic abuse of cocaine can result in long-term side effects to the human body, including the following:1, 8, 10

In addition to these long-term effects, frequent cocaine users are also at risk of suffering the following health problems:1, 8, 10, 11

Symptoms of a Cocaine Overdose

The following symptoms are telltale signs that a person may be undergoing a cocaine overdose:12, 13

As there is no specific medication that can be administered for cocaine overdose, the primary medical interventions are geared towards treating the symptoms being manifested by the patient. Interventions done by first responders will likely revolve around stopping seizures, restoring the blood flow to the heart in the case of a heart attack, and ensuring that the brain has an oxygen-rich blood supply in the case of a stroke.13

The Diagnostic and Statistical Manual of Mental Disorders, Fifth Edition (DSM-5) specifies 11 criteria for diagnosing substance use disorders. The same criteria can be applied to cocaine addiction. The 11 symptoms are:14

Chronic users of cocaine could become dependent on the drug, which means that their bodies will get used to functioning with cocaine in their systems. In the case that you suddenly stop consuming cocaine after becoming dependent on it, you may experience the following withdrawal symptoms:15

It’s important to note that developing dependence on cocaine and experiencing withdrawal symptoms is not necessarily the same as developing addiction to this substance. Cocaine addiction is characterized by compulsive use of the drug despite its harmful consequences, while cocaine dependence simply means that a person’s body has adapted to the frequent presence of cocaine.16

A person who has developed dependence on the drug must be taken off the substance properly to prevent painful, uncomfortable, and potentially dangerous acute withdrawal symptoms from manifesting.

Cocaine withdrawal is often a painful and emotionally distressing experience. It is also dangerous to go cold turkey or to quit the drug abruptly, as well as to attempt to manage withdrawal symptoms alone. You will need medical assistance in a safe, stable environment in order to help your body wean itself off cocaine.

Cocaine detoxification is overseen by medical professionals who apply evidence-based practices for managing cocaine withdrawal symptoms and mitigating intense cocaine cravings. Someone undergoing cocaine detox can expect the program to include the following interventions:

Currently, researchers are looking into GABAergic medicines tiagabine, topiramate, and baclofen as possible relapse-preventing medications for those undergoing cocaine detox. Propranolol, which was mentioned earlier, is also being investigated for its ability to promote stable abstinence in patients that have become dependent on the drug.17

When being treated for cocaine addiction, a patient will receive a combination of pharmacological and behavioral interventions that best suit their situation. These can be administered either through inpatient care or outpatient care.19

Rehabilitation from cocaine use disorder will consist of pharmacological and behavioral treatment modalities. Although it must be emphasized that there is currently no U.S. Food and Drug Administration-approved medicine for the direct treatment of cocaine addiction, there are several medications that are showing a lot of promise in controlled clinical trials.18

One example is disulfiram, which has long been used as a treatment for alcoholism. Scientists are still studying how disulfiram can decrease cocaine use, though current research indicates that it may have to do with the medicine’s ability to inhibit the enzyme that turns the neurotransmitter dopamine into norepinephrine.18

In the meantime, pharmacological interventions for cocaine use disorder will involve treatment of manifesting symptoms, as well as of any comorbidities like mental health conditions.

Additionally, behavioral treatments that have proven to be effective in addressing cocaine addiction are contingency management, cognitive behavioral therapy, and group therapy or therapeutic communities. Contingency management involves the use of motivational incentives to reward abstinence from cocaine, while cognitive behavioral therapy (CBT) helps patients recognize their triggers for drug use in order to avoid them. Group therapy and therapeutic communities allow patients to connect with people who are in a similar situation as them, as well as establish support that goes a long way in holistic healing.18

Cocaine addiction may seem like an insurmountable battle, but it’s one that you can win with the proper treatment plan and with a strong support system behind you. The sooner you get treated for cocaine addiction, the easier it will be to re-establish balance and productivity in your life.

You can take the first steps toward a full recovery from cocaine addiction by contacting Better Addiction Care. Call us at 1-800-429-7690 and ask our trained recovery support advisor to help you find a local treatment center. Better Addiction Care can also help you verify your insurance plan for inpatient or outpatient treatment, or assess your options for treatment even if you aren’t currently enrolled in insurance. Contact us today to begin healing in earnest from cocaine addiction.

A Brief History of Cocaine

The drug cocaine is derived from leaves of the Erythroxylon coca plant. Experts believe that it was in use up to 5000 years before the common era. Coca leaves served a ritual purpose, as the ancient peoples of what is now Peru once stockpiled it in burial sites in order to assist their dead in the afterlife.20

When coca leaves made their way to Europe in the 19th century, they were originally used in winemaking. Cocaine become popular in the medical field upon the endorsement of Sigmund Freud in 1884, and upon the subsequent discovery of Karl Koller that the drug could be used as an anesthetic.21

Cocaine was eventually discovered to have high addictive potential, and it was officially outlawed in 1914 as part of the Harrison Narcotics Act. In the 1980s, crack usage became widespread and drove what was called a “crack epidemic.”22 As per the 2016 National Survey on Drug Use and Health, almost 1.9 million Americans aged 18 and up are current cocaine users, or have used the drug within the past month.23