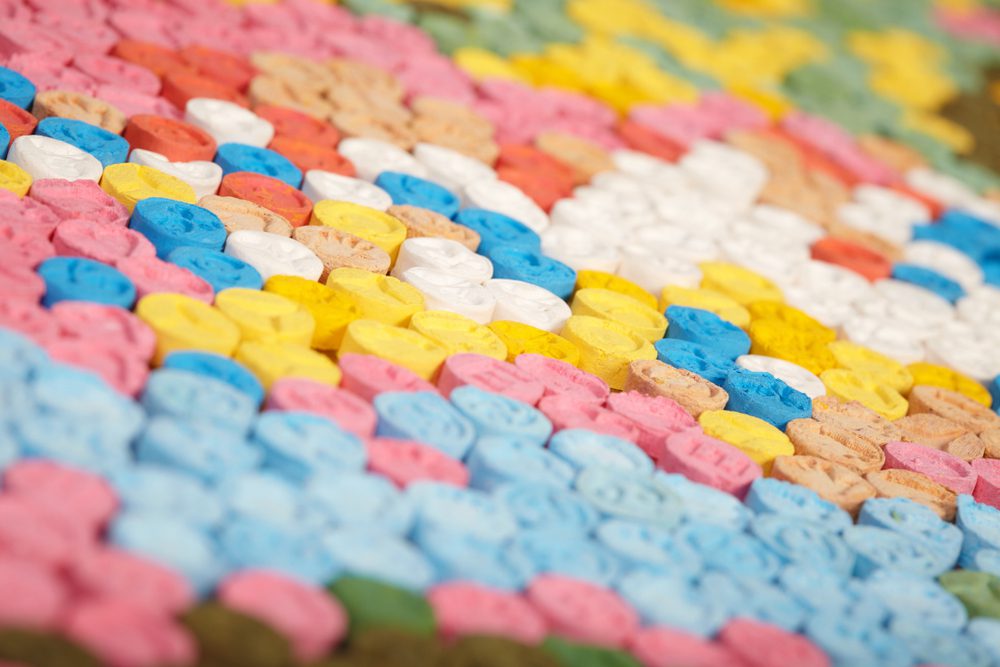 The drug 3,4-Methyl​enedioxy​methamphetamine (MDMA), also commonly known as ecstasy, molly, or simply, E, is classified as a psychoactive drug that is primarily used for recreational purposes. It is considered the drug of choice for those who actively participate in rave culture, and it can usually be found being distributed at night clubs, music festivals, and house parties. Unlike other recreational substances that are derived from plants such as cocaine or nicotine, ecstasy is a synthetic drug, achieved by altering the structure of the amphetamine molecule.

While all types of drug use, recreational or otherwise, have the potential to cause harm, pure MDMA is known for being one of the least dangerous drugs around. In fact, it is a lot less dangerous than some readily available substances like alcohol and cannabis, it is rarely habit-forming, and it is hardly ever taken outside of rave or party settings. However, since it cannot be obtained legally, it is usually manufactured using highly dubious practices and is often combined with other compounds to achieve different results. This results in  products that can be highly dangerous—and sometimes even fatal—to people.

Underestimating the dangers of ecstasy use can have perilous consequences. That’s why it’s vitally important to learn everything there is to know about this illicit substance and how one can go about receiving treatment for abuse of ecstasy. Read on below for an extensive overview on the history and nature of this drug, how it is consumed, its short- and long-term effects, and what treatment looks like for those who have unfortunately found themselves addicted to it.

A Brief History of Ecstasy

There isn’t much that is definitively known about the true origin of the drug now known as MDMA or ecstasy. Most accounts point to it having been developed and synthesized in 1912 by a German pharmaceutical company, Merck, though there is some debate over exactly what it was being developed for. Some sources claim that it was discovered while the company was in the process of developing a drug intended to suppress the appetite, while others assert that it was envisioned as a parent compound to synthesize medications meant to control bleeding.

During the late 1970s and early 1980s, MDMA developed a small following among psychiatrists, despite never having been subjected to formal clinical trials or receiving the approval of the U.S. Food and Drug Administration. Some psychiatrists believed that its hallucinogenic properties improved their patients’ ability to communicate during sessions and enhanced how they achieved insights about their issues. It also started to become more widely available on the streets around this time.

The US Drug Enforcement Administration (DEA) cracked down on MDMA in 1985, declaring an emergency ban on the drug and placing it on the list of Schedule I drugs. The substances on the aforementioned list are defined as ones with no currently accepted medical use and are not considered safe to use even under the supervision of a medical professional. They are also believed to have a high potential for abuse and dependency. MDMA has remained a Schedule I controlled substance since then, barring a short period of time between 1987 and 1988.

Currently, research is ongoing to determine whether MDMA holds any therapeutic value or not. In the early 1990s, the FDA approved the first human trial exploring the possibility of the drug helping to alleviate pain in patients who are terminally ill, or if it can be used to supplement or aid in certain psychotherapeutic applications. Clinical trials are also ongoing to verify the therapeutic potential of MDMA when treating conditions such as post-traumatic stress disorder and anxiety in autistic adults, as well as patients with cancer and other terminal illnesses.

How Is Ecstasy Used?

Ecstasy is most often distributed in tablet or pill form, though it is also available as a capsule, powder, or liquid. In pill or liquid form, it can simply be ingested through the mouth and swallowed. However, reports of smoking, snorting and injecting the drug directly into the veins have also been found.

“Parachuting” is a term used to describe the act of placing a crushed or powdered dose of MDMA on a small piece of soft paper, such as toilet or tissue paper, and swallowing it.

Users may combine ecstasy with other drugs such as alcohol or marijuana to achieve a more intense high.

How Does Ecstasy Work in the Human Body?

As an amphetamine derivative, MDMA is similar to methamphetamine (a stimulant) and mescaline (a hallucinogen). Taking it releases serotonin, dopamine, and norepinephrine from their neuron storage sites, resulting in increased neurotransmitter activity in the brain. The effects of having elevated levels of these brain chemicals are as follows:

What Are the Immediate and Long-Term Effects of Ecstasy Abuse?

Overall, ecstasy is known for its pleasurable effects, namely mood elevation, increased self-confidence and sociability, amplified feelings of closeness with others, enhanced sensation, and relaxation. However, it is these same pleasurable effects that can make it easy to overdose on the drug. To prolong the desired effects of ecstasy, many users take additional doses. However, consuming too much MDMA at once can cause a user to feel hyper-aroused, restless, paranoid, and anxious. Tolerance to its psychoactive properties also sets in quickly, and repeated doses may no longer produce euphoric effects. Should a user continue to consume MDMA regardless, they increase their risk of cardiac instability, arrhythmia, and hyperthermia, all of which can be fatal.

The release of excessive amounts of the aforementioned neurotransmitters—all of which regulate several key bodily functions—can also disrupt a user’s appetite, mood, pain, and sleeping patterns. The negative behavioral aftereffects of these disruptions can last for several days after taking MDMA. “Suicide Tuesday” is a colloquial term that refers to a 24 to 48-hour period characterized by anorexia, lethargy, and dysphoria that many users experience after binging on MDMA and other substances over the weekend.

Meanwhile, research is still ongoing on the long-term effects of using ecstasy. While the results remain inconclusive, there is reason to believe that heavy users of MDMA suffer from structural and functional deficits, and that even moderate use of the drug may still be neurotoxic. There is also a strong possibility that regular use of MDMA can lead to long-term psychiatric complications. Patients who have stopped using MDMA have reported suffering from anxiety, depression, panic attacks, and insomnia, as well as having trouble concentrating and lapses in their short-term memory.

Signs of Ecstasy Use Disorder

Studies and clinical perspectives vary on how addictive ecstasy is, or if it is even addictive at all. While there are many users who claim being addicted to the drug, the research on the subject is still lacking and unfortunately not as extensive as with many other illicit substances. Some studies indicate that while ecstasy is addictive, it is less so as compared to other drugs. However, that doesn’t mean that an addiction to ecstasy is something that should be taken lightly.

The drug lacks readily obvious withdrawal symptoms, making it difficult to tell if a user is addicted or not. Perhaps the best way to recognize an ecstasy-related problem is by counterchecking signs with the diagnostic criteria for substance use disorders provided by the Diagnostic and Statistical Manual of Mental Disorders, 5th Edition (DSM-5) These include the following:

Rehab and Treatment for Ecstasy Use Disorder

As of now, there are no specific treatments for ecstasy abuse, nor are there any medications that can treat an addiction to it. Instead, cognitive behavioral interventions are recommended for those looking to kick the habit and to get clean. These programs are designed to change the way a patient thinks, as well as their behaviors and expectancies, so that they can develop better coping skills when dealing with stressors and triggers. To manage symptoms of depression often seen in former MDMA users, healthcare professionals may prescribe antidepressant medication.

Attending support group meetings for those in drug abuse recovery can also be helpful, especially when supplemented by the aforementioned behavioral interventions. Interacting with others who share the same experience can be vital to keeping a former user accountable while supporting long-term freedom from drug use.

Dealing with an addiction problem can be one of the toughest challenges you’ll ever experience in your life. With the right kind of support, though, it can be overcome. If you or someone you know is addicted to ecstasy, you can find the help you need right now by logging on to Better Addiction Care. As a leading third-party information service provider, we can connect you to a local drug rehabilitation center near you who can help you find the appropriate treatment for your condition. Start your journey toward a drug-free life today with Better Addiction Care.