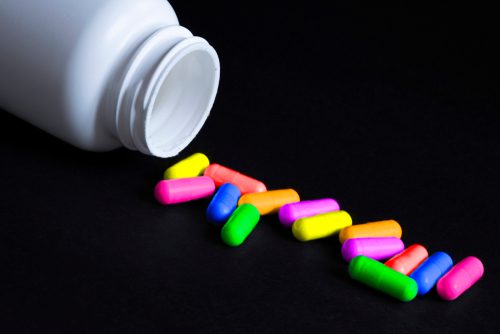 While there are different ways of classifying hallucinogens, in the US hallucinogenic drugs are often split into “classic hallucinogens” (including psilocybin mushrooms and LSD) and “dissociative drugs” (such as ketamine, MDMA, and PCP).

A Brief History of Hallucinogens in the United States

Hallucinogens have long been used by different peoples throughout the world since prehistory as part of social and religious rituals. In the Americas, indigenous peoples used ayahuasca, salvia, psilocybin mushrooms, peyote, and raw tobacco, among many naturally occurring plants and funguses in the context of religious or social ceremonies. This traditional use of hallucinogens continues and is, to some extent, protected by law in many countries, including in the United States.

The European settlers that arrived in the Americas also brought with them plants that had hallucinogenic potential, including belladonna, henbane, datura, and mandrake. Distilled alcohol was also introduced by the European settlers, which had a stronger potential for causing hallucinations than the fermented drinks available at the time.

Before the modern era, substances with strong hallucinogenic properties were mostly used in the context of social and religious gatherings as well as for medicinal purposes. By the late 19th and early 20th century, compounds in plants with psychoactive properties began to be investigated for their potential in modern medicine, particularly in the nascent practice of psychiatry. Perhaps the most important development in this period was the synthesis of lysergic acid diethylamide (LSD).

In the second half of the 20th century, interest in hallucinogenics increased. This was partly still due to interest in potential pharmaceutical applications but also now in large part due to the influence of the counterculture movements of the time. Some of these movements encouraged the use of hallucinogens to reach different levels of consciousness, much in the same way ancient cultures may have done with the substances available to them.

Since the late 1970s, the rise of so-called “designer drugs”, new hallucinogenic compounds, and ever more potent concentrations of familiar hallucinogens has raised concerns among medical professionals and community leaders. The internet boom of the late 1990s and early 2000s also made knowledge of synthesizing new drugs widely available, while at the same time adding to the already wide accessibility of different substances.

Today, hallucinogens are widely used in the United States, with over 30 million users according to the last National Institutes of Health study released in 2013. One particular trend, “microdosing,” has become popular in tech and art circles to combat depression as well as increase creativity without the negative side effects commonly associated with these substances. With new drugs and compound substances coming out every year, medical experts have been constantly challenged when it comes to the care and treatment of serious cases of hallucinogen misuse.

Dissociate drugs are  known for creating strong feelings of detachment. Some common dissociative drugs include the following:

How Are Hallucinogens Used?

Most hallucinogens are ingested. Traditional hallucinogens are often prepared as a tea, swallowed in liquid form, consumed dried, or consumed as a tablet. Some can be smoked or vaporized and inhaled. A few, such as PCP, can also be injected. LSD is notable for being capable of being absorbed through the skin, though more often it is absorbed through mucous membranes in the mouth.

How Do Hallucinogens Work in the Human Brain?

Each hallucinogenic substance or compound acts differently in the human body. However, generally speaking, most of them, particularly “classic hallucinogens,” work by altering how the brain processes the hormone serotonin. The changes in the prefrontal cortex tend to be the most prominent, as this area of the brain is involved with perception, cognition, as well as mood and arousal, among many other functions.

Disruptions in the serotonin receptors in that part of the brain can cause a hallucinogen user to experience unpredictable distortions in their perception. While the dose and the type of substance can cause a general set of effects, the user’s personality, surroundings, expectations, and state of mind can also influence the experience.

Most users of hallucinogens experience euphoria and intense feelings, as well as the signature sensory illusions that characterize these drugs. Users may also be unable to recognize reality, understand time, think rationally, or communicate with others.

High doses of hallucinogens or long-term chronic misuse can cause serious, potentially permanent changes to the brain by impairing how the serotonin system works, among other effects. This could lead to erratic behavior and problems with perception, such as seeing halos or trails on moving objects.

What Is a Hallucinogen Use Disorder?

What Are the Risks of Using Hallucinogens?

Every hallucinogenic substance has its own set of immediate and short-term risks, making it important for doctors and other treatment specialists to know just what drugs a patient has been using for better treatment outcomes. In general, however, hallucinogens of all kinds have been associated with some risks.

Low to moderate doses of hallucinogenic drugs are linked to the following:

Higher doses or chronic misuse of hallucinogens tend to intensify the above effects and can result in the following:

What Are the Treatment Options for a Hallucinogen Use Disorder?

With some exceptions (notably PCP), hallucinogens are not often considered to be as dangerous or as prone to chronic misuse as opioids, alcohol, or other commonly misused drugs. However, physical and psychological dependence is possible with repeated use. Even in types of hallucinogens that do not generally create drug-seeking behaviors, such as LSD, increased drug tolerance can be a danger to the patient.

As hallucinogens are a diverse group of drugs, it’s important that attending physicians know what substances the patient has been consuming, as well as an idea of the doses involved. This will be necessary so the safest possible interventions can be performed.

Withdrawal management (sometimes known erroneously as a “medical detox”) may be recommended to allow the patient to safely expel lingering chemical traces of the drug in their system. This is most often done in conjunction with some kind of cognitive therapy to change the behaviors involved in drug-seeking behavior. Regular therapy sessions after the initial treatment program may be recommended to address the root causes of drug use and prevent a relapse.

If you or someone you know needs treatment for a possible hallucinogen use disorder, consult a medical professional immediately to learn about your best possible options for recovery.

While hallucinogen use disorders are not generally considered as serious an issue as those related to opioids, alcohol, and prescription medicine, the potential for serious long-term health issues is always present. Unfortunately, these long-term health issues often affect cognitive and perceptual abilities, which can make it difficult for a patient to seek or maintain gainful employment.

By learning to spot the signs of a potential hallucinogen use disorder and consulting a recovery specialist early on, patients can have a much better chance of getting better outcomes during and after their treatment period. If you know someone who might be chronically misusing hallucinogens, contact a qualified physician to discuss the next course of action.