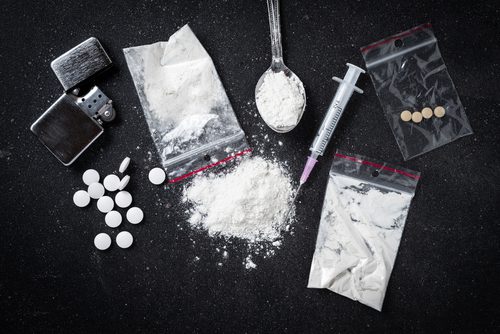 Illicit drug use has been a longstanding problem in many nations all over the globe. Because of widespread illegal manufacture, distribution, and use of illicit drugs outside medical necessity, illicit drug use is considered a major public health problem with many adverse physical and psychosocial consequences. It breaks many families apart, causes unemployment, and poses great financial burden on users. It also creates economic and social problems that the government and society in general have to bear.

There are many factors contributing to the onset of illicit drug use, including family dynamics and social pressure. Poor quality of parent-child interactions, parental use of drugs, having peers who engage in illicit drug use, and being of low socioeconomic status are just some factors that predispose an individual to illicit drug use.

The lag time from the beginning of use to dependence is shorter for illicit drugs than that of alcohol and nicotine. Dependence on cocaine can occur in as short as 2 years and within 3 years for those who use cannabis. About 9% of cannabis users eventually become dependent users.

What Are Examples of Illicit Drugs?

Cocaine is one of the most popularly used illicit drugs worldwide, and also the most frequent cause of drug-related ED visits. In 2010 alone, almost half of a million drug-related ED cases were related to cocaine.

Cocaine is a highly potent and addictive substance. It has the ability to rapidly increase levels of serotonin and dopamine in the brain, resulting in extreme levels of euphoria. It also activates the reward circuit of the brain which is responsible for drug-seeking behaviors, addiction, and dependence.

Cannabis, also known as marijuana, is one of the most common recreational drugs used in the United States. The medical use of cannabis is legal in 15 US states, although over 16.7 million people reported cannabis use outside medical supervision within one month in 2009 alone.

Cannabis binds to cannabinoid receptors in parts of the brain responsible for pleasure, memory, concentration, and sensory perception to name a few. As a result, cannabis has the ability to cause impaired cognition and to disrupt an individual’s ability to perform tasks. Cannabis also activates the brain’s reward system, which makes it a potent psychoactive drug that can produce feelings of euphoria and intense pleasure shortly after ingestion.

World War II saw a rampant increase in amphetamine abuse, when soldiers were encouraged to take them to combat fatigue and improve morale. After the passage of Controlled Substances Act in the US in 1970, manufacture and distribution of amphetamines rapidly decreased, consequently leading to a decline in amphetamine-related drug abuse. However, amphetamines circulated back in the market during the 1980s, primarily because a lot of amateur drug laboratories have found a way to synthesize and distribute them in cost-effective ways. Methamphetamine, more popularly known as meth, is today the most commonly abused and also the most potent form of amphetamine.

Amphetamines take the chemical structure of the neurotransmitters epinephrine and dopamine. They have the ability to mimic their physiologic effects such as euphoria, increased productivity, and increased libido. When used chronically, amphetamines can lead to addiction, craving, and tolerance among its users.

Ecstasy is a derivative of amphetamines and refers to a variety of what are called “designer drugs” – drugs synthesized in secret or illegal laboratories that mainly function to mimic the pharmacologic effects of controlled substances. The most common form of ecstasy is 3,4-methylenedioxymeth-amphetamine, or MDMA. Ecstasy is a popular drug used by young adults in night clubs or rave parties.

Because ecstasy can increase the levels of both serotonin and norepinephrine in the brain, it has both hallucinogenic and catecholaminergic effects. People who use ecstasy report feelings of euphoria, body warmth, and increased extroversion within only 45 minutes after ingestion.

Heroin, also called “hell dust,” is a semi-synthetic derivative of an opioid made from the resin of the opium poppy plant. It is a white or black powder that is smoked or snorted. When mixed with water, it can be injected intravenously.

Heroin binds to opioid receptors in the brain and the spinal cord. Because it acts similarly with opioids, it can also produce analgesic effects, which make it prone to abuse. Much like other recreational drugs, heroin has the ability to bring about feelings of euphoria and intense pleasure in just a matter of minutes.

PCP, also known as angel dust, was initially advertised as an anesthetic but was eventually withdrawn from the market because of its adverse neuropsychiatric effects such as hallucinations. PCP can be taken either orally, intravenously or through smoking. It is considered one of the most dangerous illicit drugs because of its toxic effects in the nervous system. Thankfully, PCP use has steadily declined in the last few decades.

LSD is a potent hallucinogen that was previously explored for and utilized in the treatment of psychosis, alcoholism, and criminal behavior. Like PCP, the use of LSD as a recreational drug has consistently dropped over the last few years.

The mortality rates among illicit drug users are up to 14 times higher than the general population. Most of the casualties are young adults whose deaths were primarily preventable. The major causes of death attributable to illicit drug use are overdose, suicide, and accidents. However, the single most significant cause of mortality among drug users is stroke. In fact, drug use may be the most common predisposing factor for stroke in patients below 35.

Other health risks correlated with illicit drug use are cardiac failure, brain hemorrhage, kidney failure, hepatitis, and HIV. HIV accounts for millions of deaths among injectable drug users worldwide. In low- and middle-income countries, injectable drugs are the primary driver of HIV epidemics among its users.

Apart from general medical conditions, drug dependence also causes preventable injuries that may result from accidents or criminal activities. Because illicit drugs have the potential to alter one’s cognition and behavior, they can manipulate a user into engaging in risky behaviors that can lead to physical trauma and injuries.

There are many forms of psychotherapy – each of which has their own advantages and benefits. Cognitive-behavioral therapy or CBT is a form of psychotherapy where counsellors help patients identify and recognize their own negative behavior. When patients become self-aware, it facilitates behavioral modifications, empowers them to seek recovery, and most importantly, helps them stick to their treatment plans. Cognitive-behavioral therapy also provides them with mental clarity so that they can learn alternative ways to cope with their problems.

Studies have also shown successful pharmacological interventions for heroin and other opioid dependence. Methadone, buprenorphine, and even morphine maintenance have proven effective in treating heroin addiction. Methadone, in particular, has additional benefits as it decreases the rate of HIV transmission through sharing of needles. However, no maintenance pharmacotherapies have been proven to be efficacious in addressing cannabis and cocaine dependence. Thus, psychotherapy is considered the cornerstone of management of addiction to these particular drugs.

Better Addiction Care offers free advisory service to help anyone who is looking for the best rehab facilities all over the country. We believe that every patient is unique, and anyone who suffers from addiction deserves a patient-centered, individualized treatment that is well-suited to their needs. If you or your loved one is seeking recovery from addiction, Better Addiction Care will help you find your path to healing.