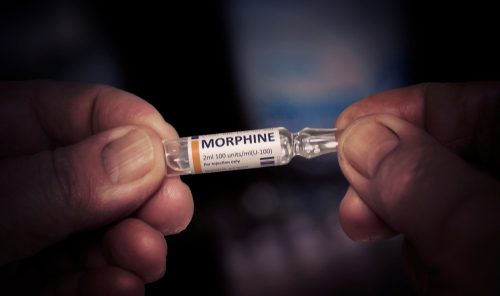 Morphine is a synthetically produced opioid alkaloid derived from the plant Papaver somniferum or opium poppy. It is one of the most common opioid analgesics and comes in a variety of preparations, including oral solutions, immediate- and extended-release tablets, capsules, and injectables.

A Brief History of Morphine

In 1806, German chemist Friedrich Wilhelm Sertürner isolated morphine, which was then still unidentified, from crude opium by immersing it in ammoniated hot water. The extracted compound was a yellowish-white crystalline which was believed to be the active ingredient in opium. Sertürner tested the compound on animals, and these experiments later demonstrated its sedative properties. However, Sertürner tried to push the limits of his experiments which led to the death of several animals.

After a couple of human experiments, Sertürner concluded that the compound had pain relief and euphoric effects. In higher doses, it led to psychiatric manifestations and caused slowed breathing, nausea, vomiting, and cough depression. The chemist eventually named the compound morphine, as a reference to Morpheus, the Greek God of dreams.

In the mid-19th century, morphine was commercially produced and began to be widely used as a pain reliever and as substitution therapy for opioid addiction. Not long after, however, morphine addiction became widespread. During the Civil War, many soldiers fell victim to morphine-derived substance use disorder, and the term “Soldier’s Disease” was coined to pertain to morphine dependence among its users. The rise in the use of hypodermic needles as a vehicle for morphine delivery also greatly contributed to this alarming situation.

As a result, in the early 20th century, governments all over the world authored and passed legislations to control morphine addiction. Some United States federal laws include the Harrison Narcotics Tax Act in 1914 and the Controlled Substances Act in 1971. These policies aim to regulate and tax the production and distribution of opioids and other drugs of abuse. In the United States, morphine is currently classified as a Schedule II controlled substance under the Controlled Substances Act. It is also considered a Schedule I drug under the Single Convention on Narcotic Drugs according to international law.

How Does Morphine Work in the Human Body?

Morphine belongs to a class of analgesic drugs called opioids. Morphine, like other opioid drugs, binds to mu, kappa, and delta receptors. These receptors can be found in both the central and peripheral nervous systems and produce a variety of effects including analgesia, euphoria, sedation, and slower respiration when activated.

Morphine is FDA-approved for pain management, more specifically in the treatment of acute or chronic moderate to severe pain. It is generally prescribed in palliative or end-of-life care, pain management of cancer patients, and in the treatment of vaso-occlusive pain such as in sickle cell disease. In the emergency setting, morphine is also a first-line agent for acute coronary syndrome, especially in myocardial infarction (MI). Its analgesic properties, along with its lowering effects on heart rate, blood pressure, and venous return, have been proven to increase survival among MI patients.

Off-label use of morphine includes any condition that causes pain, such as musculoskeletal, abdominal, respiratory, and neurologic diseases such as headache. Though rarely, some physicians may prescribe morphine as a sedative, oftentimes in combination with a benzodiazepine like lorazepam.

How Is Morphine Taken or Administered?

As mentioned above, morphine comes in various preparations. It can be administered through different routes such as oral, intravenous (IV), epidural, and intrathecal, and as a suppository. Oral preparations, which are the most widely used, are available in both extended- and immediate-release tablets and capsules, mostly for the treatment of acute and chronic pain. IV, epidural, and intrathecal injections are reserved for more severe pain that cannot be managed by tablets or capsules.

What Are the Immediate and Long-Term Effects of Morphine Abuse?

Because of its potent analgesic effects, morphine is generally prescribed for the treatment of acute and chronic severe pain. But even at regular doses, morphine can be highly addictive, making it prone to misuse – that is, taking morphine in other ways than that specifically instructed by a doctor. Some of the short-term manifestations of morphine abuse include:

Morphine withdrawal can also cause a variety of symptoms, including:

The Diagnostic and Statistical Manual of Mental Disorders (DSM) is a handbook used by healthcare professionals all over the world as a guide to the diagnosis of mental disorders. It is the standard classification of mental disorders used for clinical treatment, research, and other purposes. The DSM-5 Criteria for Substance Use Disorders (SUD) lists 4 main categories of pathological set of behaviors related to substance abuse:

These categories cover all 11 criteria for the diagnosis of SUDs:

Among these, individuals who develop SUD linked to morphine often develop those related to tolerance and impaired control, especially considering that the desire to avoid or reduce one’s level of pain can be a very intense motivator. Attempting to operate a motor vehicle or heavy machinery while under the influence of morphine is also highly inadvisable and could cause serious harm.

If an individual is exhibiting any of these signs, it’s best to seek professional help. Rehabilitation facilities have trained substance use disorder specialists who know how to identify these signs and help individuals with specially designed treatment programs.

Rehab and Treatment for Morphine Use Disorder

The gold standard for the treatment of morphine abuse is methadone, a potent, long-acting synthetic opioid agonist that works by mimicking the natural effects of morphine in the body. Compared to morphine, methadone has a longer duration of action and longer half-life, making it less prone to abuse as fewer doses are needed to achieve its analgesic effects. Generally, methadone is administered in tapered doses and frequency, to further reduce its abuse potential.

Clonidine is an anti-hypertensive medication that has been shown to reduce symptoms of morphine withdrawal. It is an alpha-2 adrenergic agonist that has been proven effective in controlling withdrawal symptoms such as diarrhea, vomiting, abdominal cramps, anxiety, and insomnia. It is important to note that clonidine should not be given together with an opioid substitute such as methadone, as these drugs may have additive effects in lowering blood pressure and may cause dizziness, loss of consciousness, and changes in heart rate.

Buprenorphine, a partial opioid agonist, can also be used as an adjunct in the treatment of moderate to severe morphine withdrawal. Buprenorphine relieves withdrawal symptoms and has been shown to reduce morphine cravings among users. However, buprenorphine must be used with caution in patients with diabetes, urethral obstruction, and respiratory deficiency.

Although the cornerstone of the treatment of morphine use disorder remains to be pharmacologic, previous studies have shown that pharmacologic intervention alone leads to higher rates of relapse as compared to combined pharmacologic and psychosocial strategies. Hence, the value of psychosocial interventions in morphine use disorder should not be disregarded. These interventions, which include motivational enhancement, cognitive-behavioral therapies, and relapse prevention, aim to enhance retention in treatment, reduce the risk of relapse, and address interpersonal and psychological problems that may have been caused by drug abuse.

While morphine has proven its usefulness in the medical field, the potential for its abuse cannot be ignored. This allows its acquisition under the guise of medical treatment to be one of the easiest ways to illegally gain access to it. Individuals who become dependent on morphine will need to undergo a specialized treatment program to recover from its addictive properties.

The journey to full recovery from morphine addiction can be extremely long and difficult, but it is not impossible. Better Addiction Care is here to guide you as you begin your treatment process. If you or someone you know is suffering from morphine abuse, contact us. Our lines are open 24/7, and our representatives will be glad to assist you.