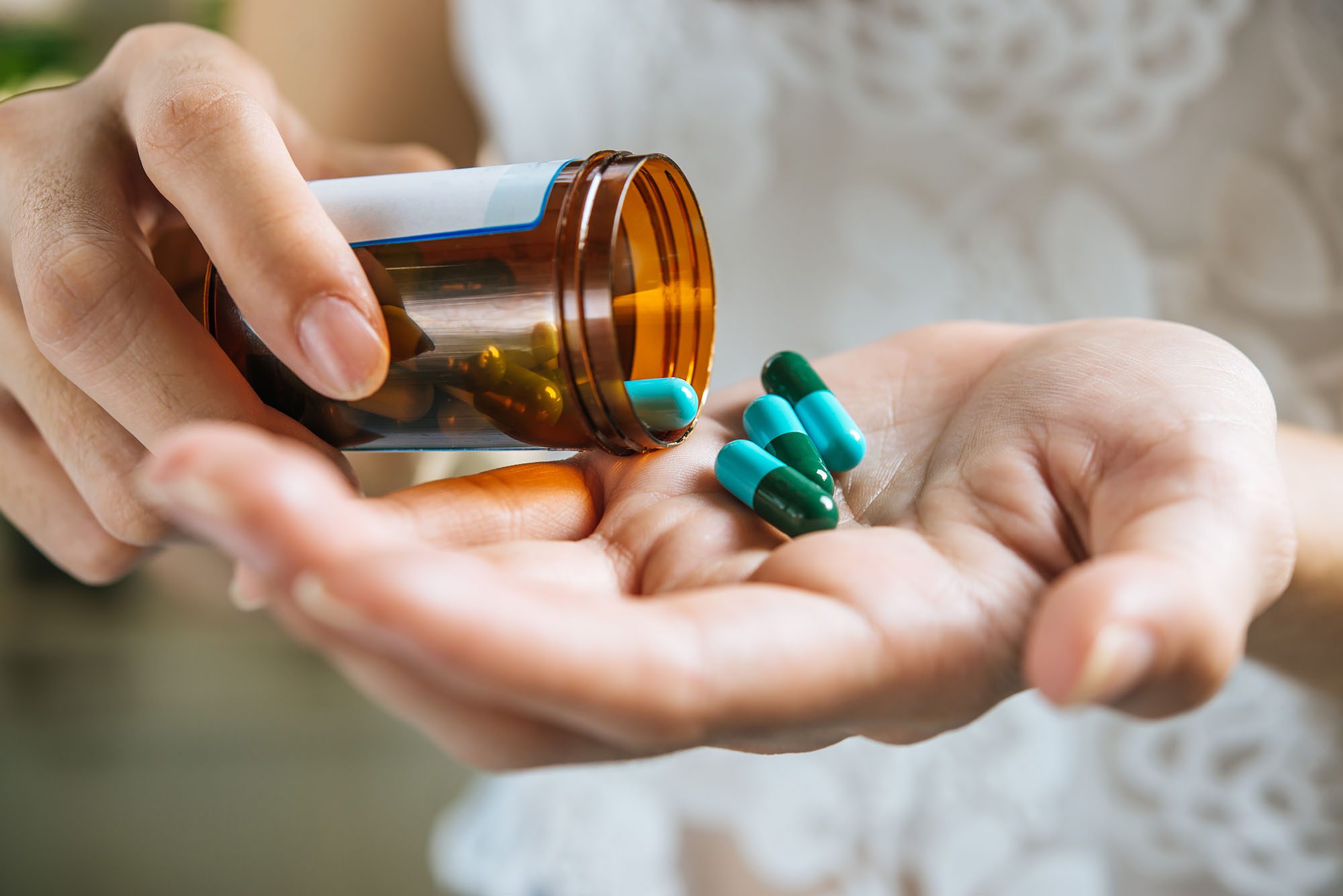 Most medications used in the treatment of substance use disorders bind, whether fully or partially, to various neurotransmitter receptors in the nervous system that are also targets of specific drugs of dependence. The goals of these medications are to replace the abused drugs and detoxify the patient as they undergo other forms of therapies.

Benzodiazepines are anti-epileptic and anxiolytic medications that stimulate the release of GABA in the brain. GABA is a neurotransmitter that acts to reduce activity of the central nervous system, more specifically to decrease heart rate, blood pressure, sweating, and anxiety—symptoms that are associated with alcohol withdrawal. Benzodiazepines improve treatment outcomes of alcohol dependence, but caution must be observed to avoid drug interactions that may occur if the patient relapsed into drinking alcohol during treatment with benzodiazepines, as alcohol and benzodiazepines act synergistically to depress the central nervous system. This can potentially lead to coma or death.

When taken with alcohol, disulfiram produces a reaction in the body called disulfiram-ethanol reaction (DER). DER is an aversive physiological state which presents as nausea, vomiting, hyperventilation, increase in heart rate, and shortness of breath. As these symptoms occur, the body is conditioned to refrain from drinking more alcohol. Disulfiram then serves to control addictive behavior through negative reinforcement which aids in achieving an alcohol-free state before the patient’s integration into psychosocial treatment programs. This medication often has poor patient compliance, because they can simply not take it if they decide to drink.

Naltrexone is an opioid antagonist that facilitates alcohol abstinence by blocking the release of dopamine, the neurotransmitter responsible for the rewarding effects of alcohol. It is used to reduce alcohol cravings and has been found to minimize the frequency and amount of drinking among patients. Another theory that supports the efficacy of naltrexone as an adjunctive pharmacotherapy in alcohol dependence is that since naltrexone can result in sedation much like alcohol, patients will tend to avoid drinking alcohol in order to prevent the additional sedative effects they may experience.

The exact mechanism by which acamprosate functions to reduce withdrawal symptoms and prevent relapse is still unclear. However, unlike most medications used in the treatment of alcohol use disorder, acamprosate has no abuse potential and generally has better tolerability among patients.

Topiramate is a drug mainly used in the treatment of epilepsy. It has the ability to inhibit glutamate pathways and GABA activity, and the combined effects of these actions lead to reduced dopamine activity which subsequently reduces the addictive and rewarding effects of alcohol intake. Because of its side effects including cognitive problems, topiramate must be given in slowly increasing doses, starting with the lowest dose. This is the one alcohol addiction medication that is not FDA-approved for the treatment of alcohol dependence, but still, it is often prescribed off-label. Recent research conducted by the University of California San Francisco has also studied a new dual-drug therapy that may treat alcoholism by alleviating alcohol cravings and rewiring the reward network in the brain.

Bupropion is an atypical antidepressant that has been studied to be as effective as nicotine replacement therapies in managing nicotine withdrawal symptoms. It was the first non-nicotine-based drug used in smoking cessation therapy and is only licensed for use by people 18 and above. Combination therapies of bupropion and nicotine replacement medications also showed significant benefits in nicotine withdrawal. Bupropion has moderate tolerability despite its adverse side effects which include insomnia, dizziness, and nausea and vomiting.

Varenicline is a long-acting oral medication that stimulates nicotinic receptors in the brain, producing similar effects in the body as nicotine. However, unlike nicotine, varenicline is long-acting, so that the patient only requires two doses at most each day to achieve the same effect as nicotine does in multiple doses. This helps in reducing tobacco cravings in patients and increases their chance for successful smoking cessation.

Methadone is an analgesic used as a maintenance medication in the long-term treatment of opioid dependence. It is a full opioid agonist which acts to produce the effects common among all opioid drugs such as morphine and heroin. The goal is to reduce opioid dependence by replacing these addictive substances while controlling withdrawal symptoms associated with opioid withdrawal.

Methadone is potentially fatal in higher doses. It increases the risk for liver dysfunction, especially when used in combination with other drugs such as benzodiazepines and alcohol. Methadone maintenance, therefore, must be supported by counseling and direct observation by medical professionals for daily dosing. As the patients become more stabilized and show favorable behavior with regard to adherence to treatment, take-home privileges for methadone can be given.

LAAM is primarily used as a replacement therapy for opioid dependence and is a great alternative to methadone. It requires less frequent dosing which improves adherence to treatment and allows for fewer clinic visits, which also facilitates easier integration into other activities such as work and other psychosocial interventions the patient may be needing. Its efficacy is comparable to methadone, although several studies have shown that methadone has higher retention rates compared to LAAM.

Buprenorphine has been approved for outpatient office-based administration. It comes in pills or film sheets that dissolve sublingually and is most effective when administered with naloxone. The combination therapy of buprenorphine and naloxone also further reduces its potential for abuse.

Naltrexone is an opioid antagonist often used to prevent relapse in opioid abstinence programs. Because of its ability to block the release of dopamine, naltrexone reduces the addictive and analgesic effects of opioids. Patients who use opioids together with naltrexone will therefore find it hard to get “high,” decreasing future cravings and increasing likelihood to remain abstinent. It also does not have abuse potential and has zero risk for overdose.

Presently, no medications have been proven to be efficacious in the treatment of abuse of illicit drugs such as cocaine and methamphetamine. Studies were made to investigate the usefulness of some drugs, including buspirone and modafinil for cannabis and cocaine dependence respectively, but no conclusive evidence was found.

Because most drugs of dependence exert different mechanisms of action in the body, the use of combination therapy in the treatment of addiction must always be considered. Using medications that target different processes breaks the addiction cycle and optimizes treatment outcomes. Using combination therapy also helps reduce relapse tendencies, controls withdrawal symptoms, and improves adherence to treatment. One example is naltrexone and acamprosate for the treatment of alcohol dependence. Acamprosate alleviates withdrawal symptoms while naltrexone reduces cravings and prevents relapse. The combination of these medications targets two different processes in the addiction cycle which greatly contributes in achieving a substance-free state for the patient.

Behavioral Intervention as an Adjunct to Pharmacotherapy

Although medications are extensively used by rehabilitation centers as a primary mode of treatment in substance use disorder, one major limitation seems to be adherence. Frequent dosing, adverse side effects of medications, and even low motivation are just some factors that affect patients’ compliance to their treatment regimen. Medical professionals and addiction experts therefore encourage integrating behavioral and psychosocial interventions in treatment programs in order to improve retention rates.

There is an overwhelming body of knowledge that focuses on the importance of these interventions in treating addiction. Some of the most studied approaches include community reinforcement, motivational interviewing, and medication compliance therapy. These programs, among many others, do not only encourage adherence to treatment but also promotes patients’ overall commitment to their full recovery.

Because of the recent technological developments that have made medicines safer, more tolerable, and more efficacious, pharmacotherapy has gained a significantly important role in treating addiction, from detoxification to relapse prevention. The use of medications in the treatment of addiction is therefore unquestionable and must be encouraged whenever possible. By using combination therapies, the effectiveness of these medications further improve treatment outcomes by targeting different checkpoints in the addiction cycle. Lastly, behavioral and psychosocial interventions must be in place and employed alongside the use of medications to ensure patients’ adherence to their treatment regimen.